In the second part of the blog series, we proceed a Heatmap Analysis of the SQL Server FCI Environment, which is the second step in a successful SQL Server capacity planning project.

Check out the previous blogpost of this series where we set the scene and described how to prepare for the capacity planning project on an Active-Active Failover Cluster Instance environment.

Why you should love heatmaps

Heatmap is a great tool for visualizing the changes in capacity utilization over a certain period.

For DBAs and sysadmins, heatmaps offer a very concrete, easy-to-illustrate way to show the over- and under-utilization of the SQL Servers and instances for your superiors:

For preparing the actual capacity planning, SQL Governor software provides a set of comprehensive heatmaps for all this. You can filter out the service time from all calendar hours to get exact understanding of the average and peaking CPU utilization on different time intervals. It is also possible to drill down from server level into individual instances.

The monthly heatmap below visualizes the average and peaking monthly CPU utilization for each SQL Server and instance.

As can be seen from the heatmap, SOURCEDB2 seems to be too busy for a very business critical server. Average CPU should not exceed 40% utilization and peaking CPU should not exceed 60% level on any given month for a standalone server. In the case of an Active – Active cluster, the critical limits are closer to the 20% – 30% level.

SOURCEDB1 is not that busy in terms of average CPU usage, which is a good thing. Yet still, peaking CPU is relatively high.

This heatmap visualizes average and peaking daily CPU utilization for each SQL Server and instance. You are also able to drill down into individual hour series of a desired date.

As can be seen from the daily heatmaps, the workloads have been exceptionally high on SOURCEDB2 from 13th until 22nd of January. 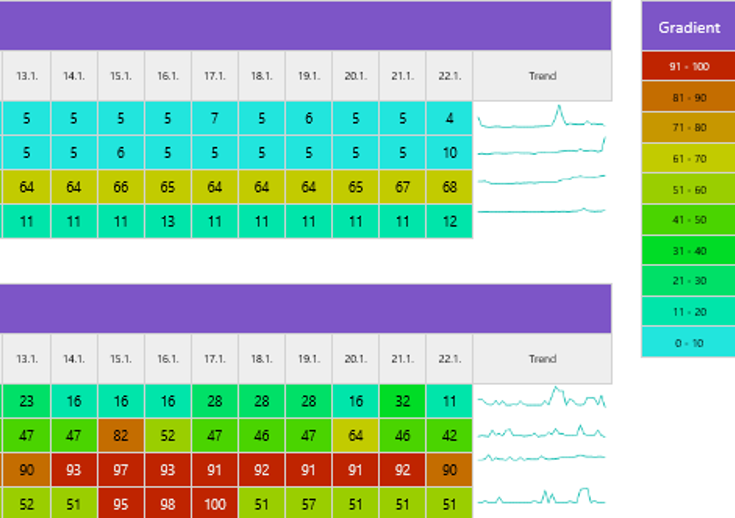 When inspecting the time series of the busiest day, which seems to be the 15th of January, we can see that the server is especially busy during the late evening to night hours.

In the next part of this blog series, we will dig deeper into the CPU side of these servers, conduct a best fit analysis of the environment, and right-size the servers.

In my next blogpost, I will go through the step 3: Conducting best fit analysis of the environment.

Wish to learn more on the topic? We have a webinar coming up on Thursday 27 February with our partner Soaring Eagle Consulting. In the webinar, we go through the SQL Server FCI Active-Active capacity planning process, step by step.