According to the different studies, about 70 to 80% of the Microsoft SQL Server performance problems are due the bad code, and rest 20-30% is infrastructure problems, often due the poor capacity planning.

SQL Governor is the only software on the market to offer both performance management and capacity planning features. It is ideal for helping to proactively alert about problems in order to fix them.

What is SQL Server Performance Optimization?

”SQL Server performance optimization targets to long-term well-being of your Microsoft SQL Server estate. Without continuous nurturing of your SQL Servers and databases, SQL Server performance starts to degrade, typically resulting into response slowness and even availability issues. With right set of  tools and features, SQL Governor makes it easy and straightforward to identify such bottlenecks allowing a DBA to pinpoint and fix the issue. SQL Server Performance monitoring and optimization is typically targeted to following technical areas:

SQL Governor software allows you to monitor data platform 24/7 in real-time to effectively identify the root cause of performance problems. SQL Governor supports 64 performance counters to give you essential information. 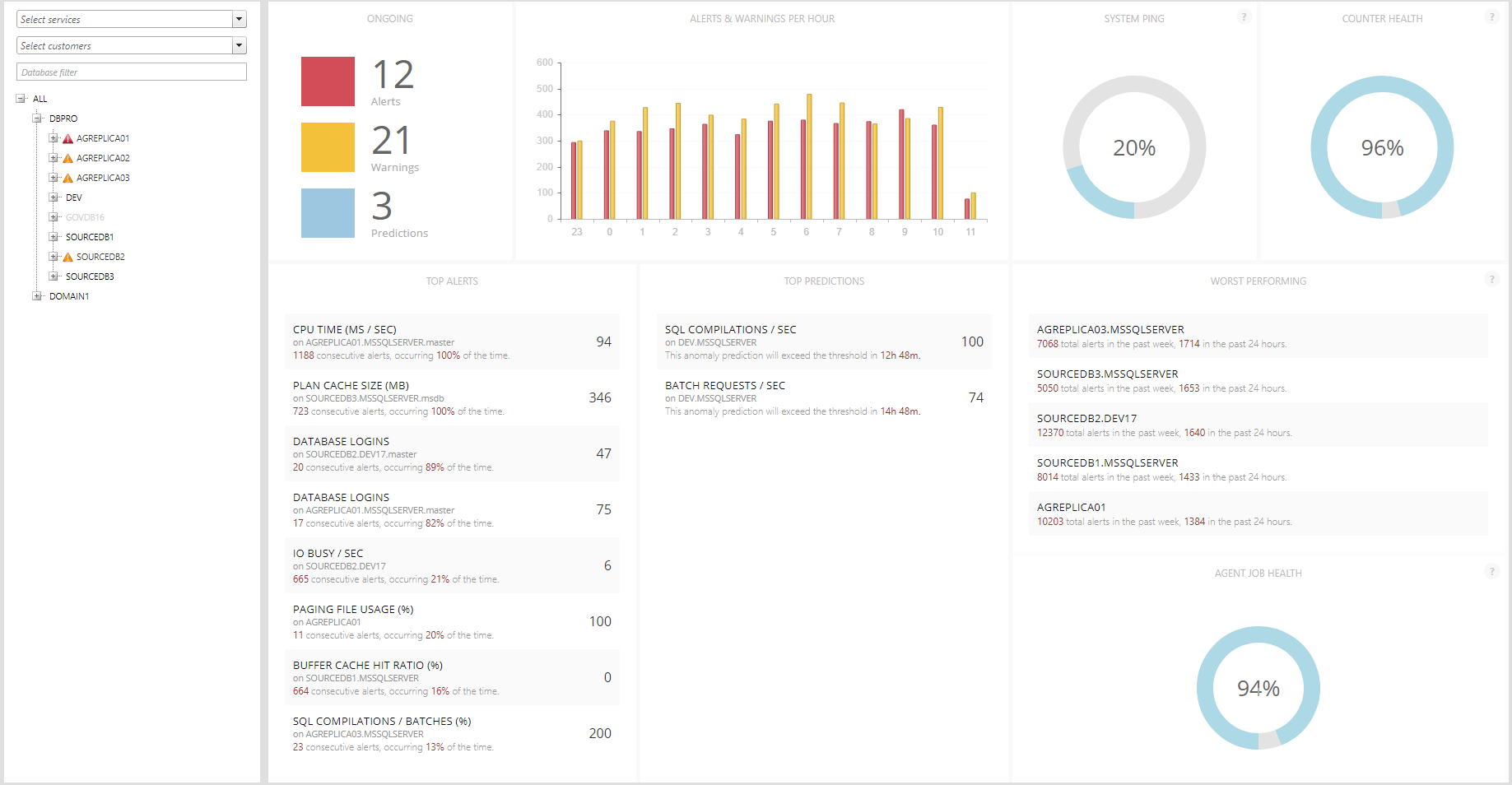 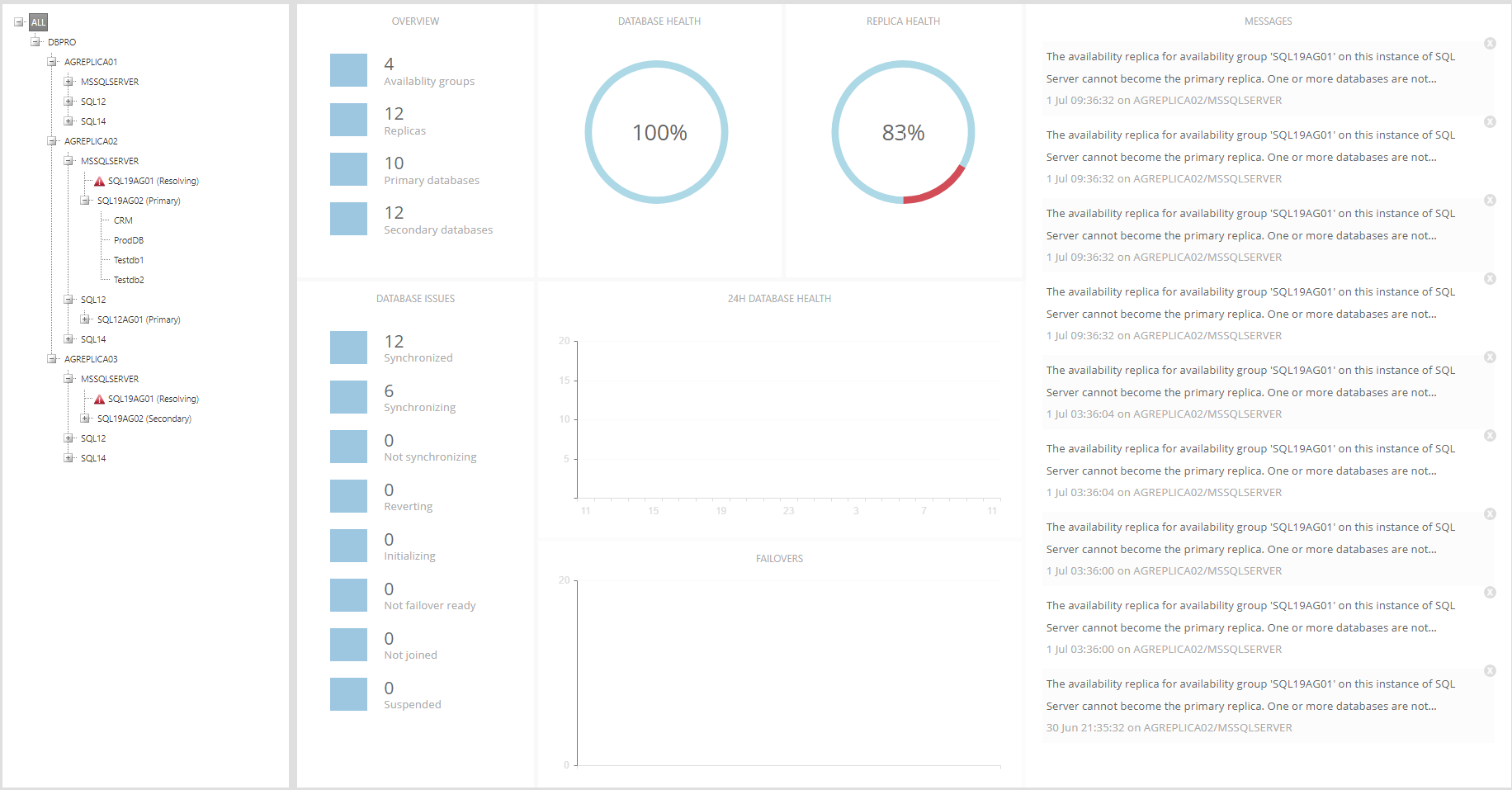 SQL Governor provides profound support for Microsoft SQL Server Always On availability groups monitoring. With this functionality it is easy to monitor any number of Availability Groups and their states in real-time.

Let SQL Governor automatically identify your monitoring baselines. In addition to that, you are able to individually adjust performance counter alert and warning threshold levels and automate these alerts to be sent to desired e-mail recipient(s).

Reactive alerts are the ones that are thrown when a certain threshold point is exceeded real-time. SQL Governor has built-in following reactive alerting mechanisms: 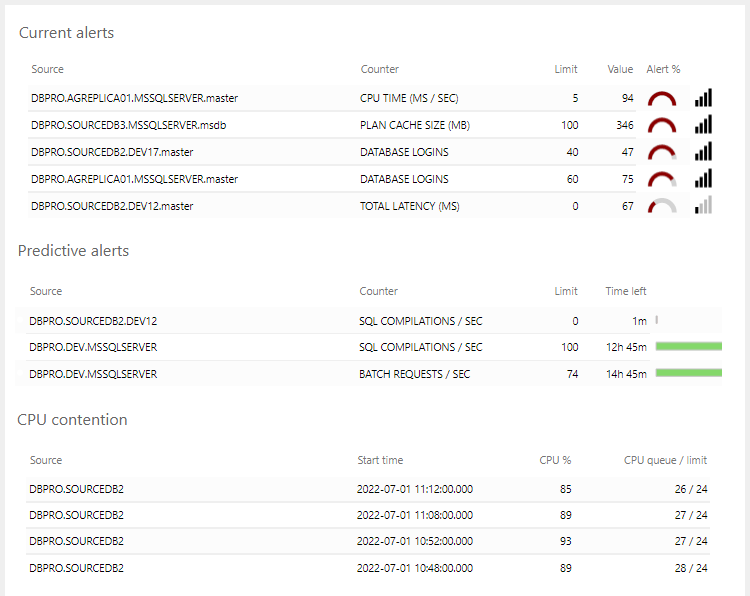 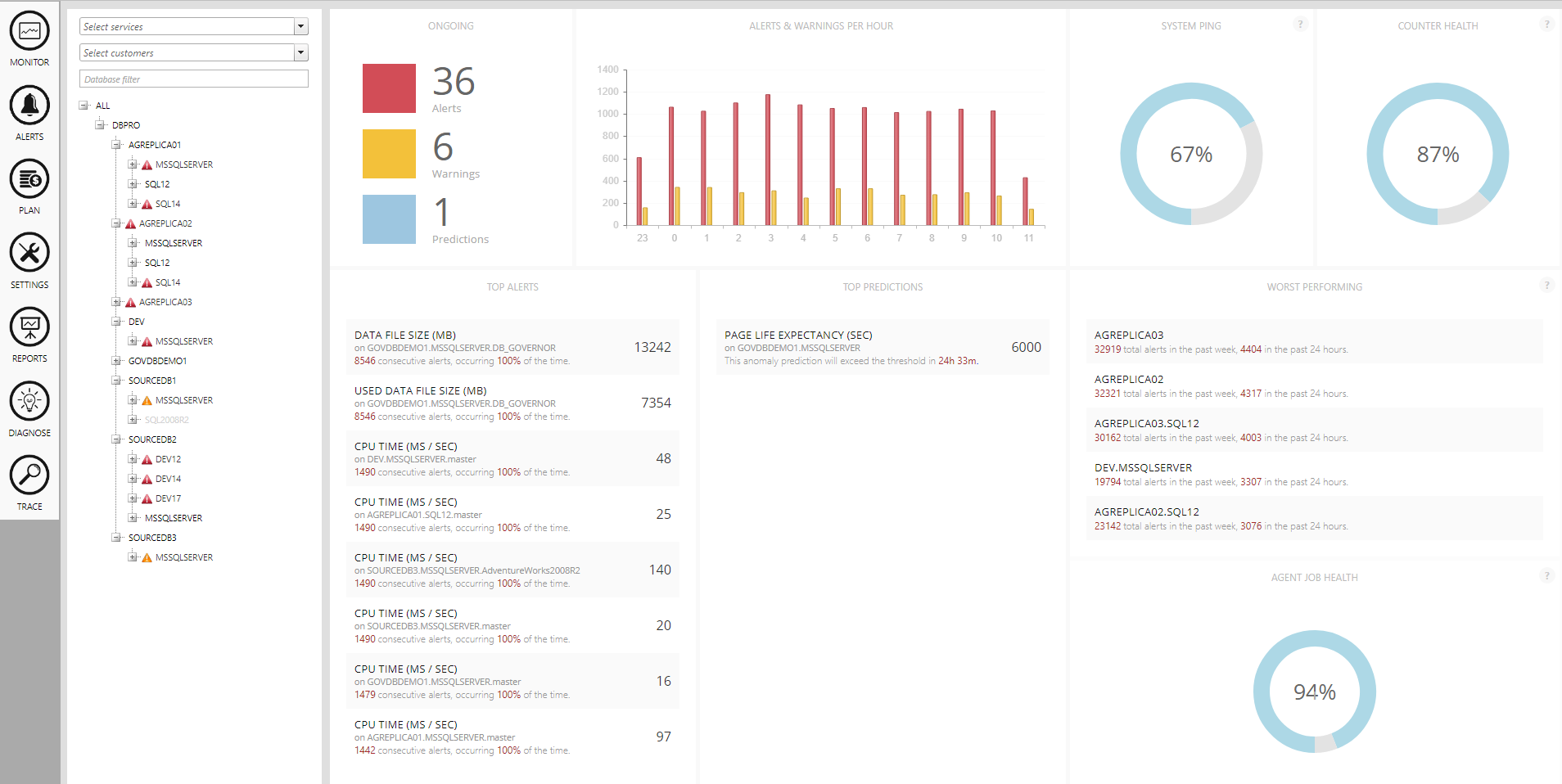 A critical alert can be tagged for any server, instance or database performance counter. Critical alerts are prioritized and shown in the SQL Governor alerting dashboard with red exclamation mark.

Custom alerts are a powerful mechism to create almost any kind of an alert that returns a value, based on SQL Server DMV’s (Dynamic Management Views). Custom alerts can be queried on instance or database level and are very configurable. 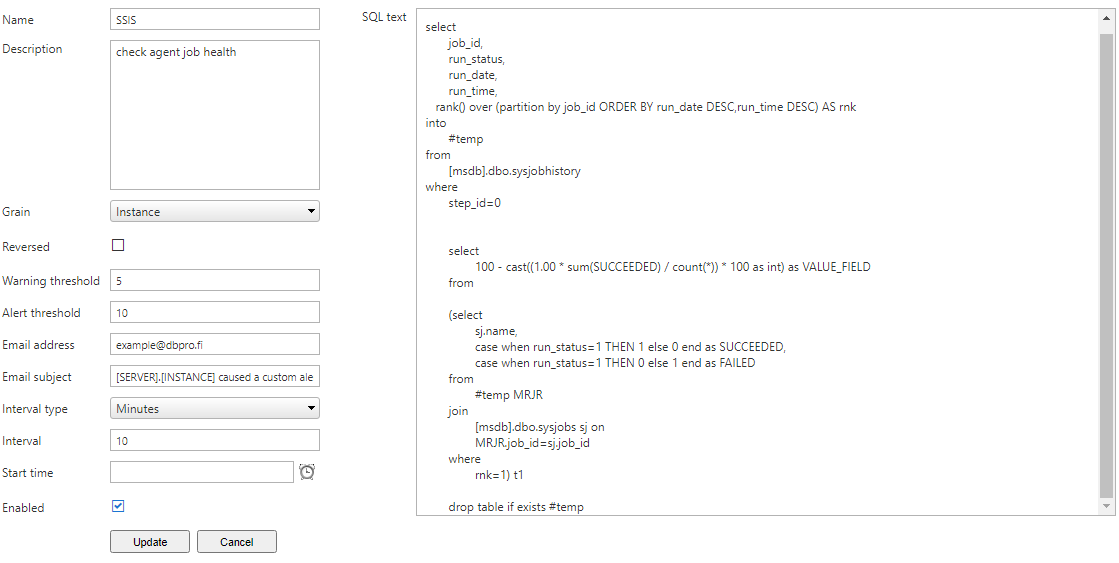 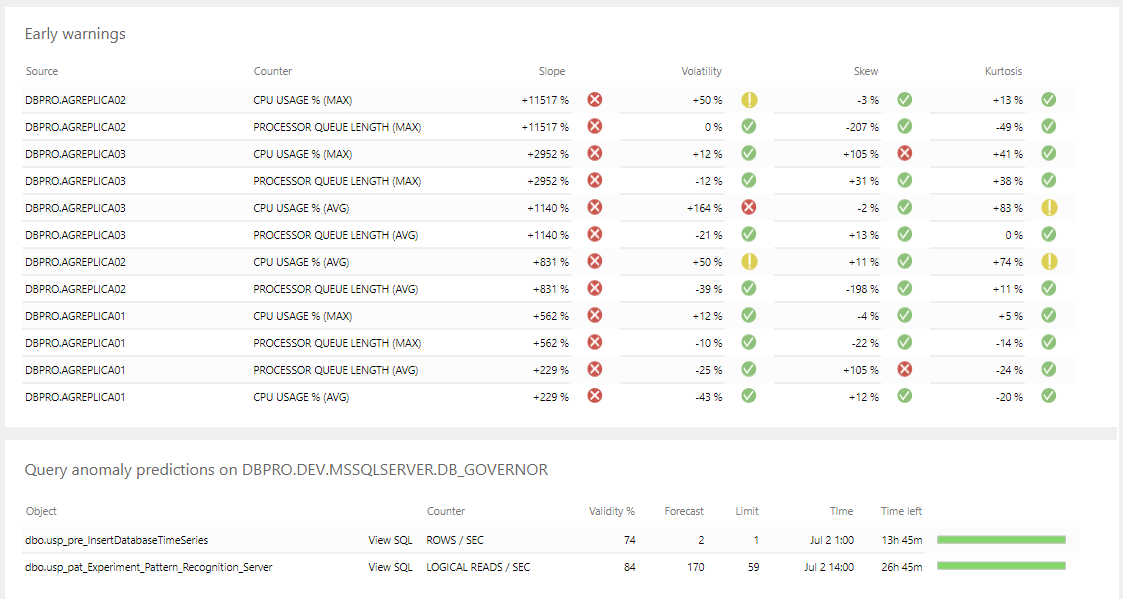 The idea of predictive alerting is to foresee potential ms sql performance bottlenecks before they even occur. In this way, DBA has more time to react and in best case DBA is able to identify and fix the problem before its potential occurrence, resulting in better SLA’s and even potential uptime.

Predictive alerts in SQL Governor are:

When SQL Server processes any task, It is always waiting some resource. These resources can be such as:

SQL Governor collects these waits automatically and visualizes them on one-minute granularity. By visualizing these waits, we are able to identify different kinds of resource bottlenecks and to drill down on individual T-SQL query batches and see which statements are using the most resources. This way it is easy for a DBA to pinpoint potential problem in T-SQL code, indexing etc. 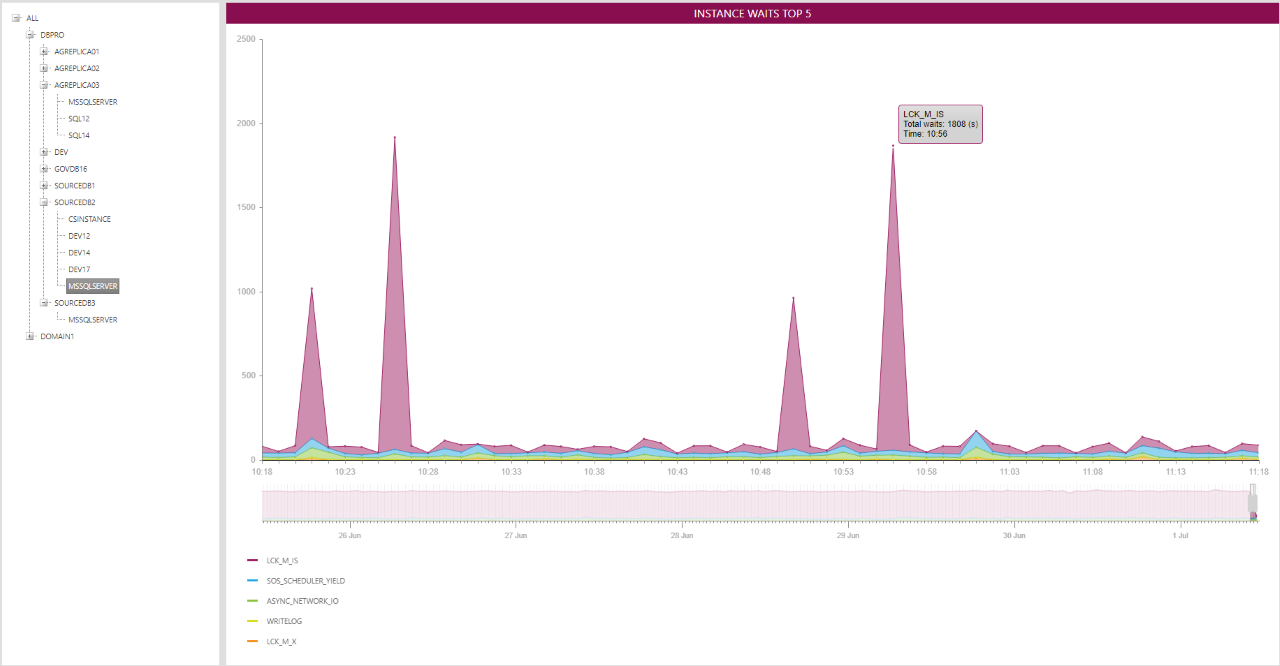 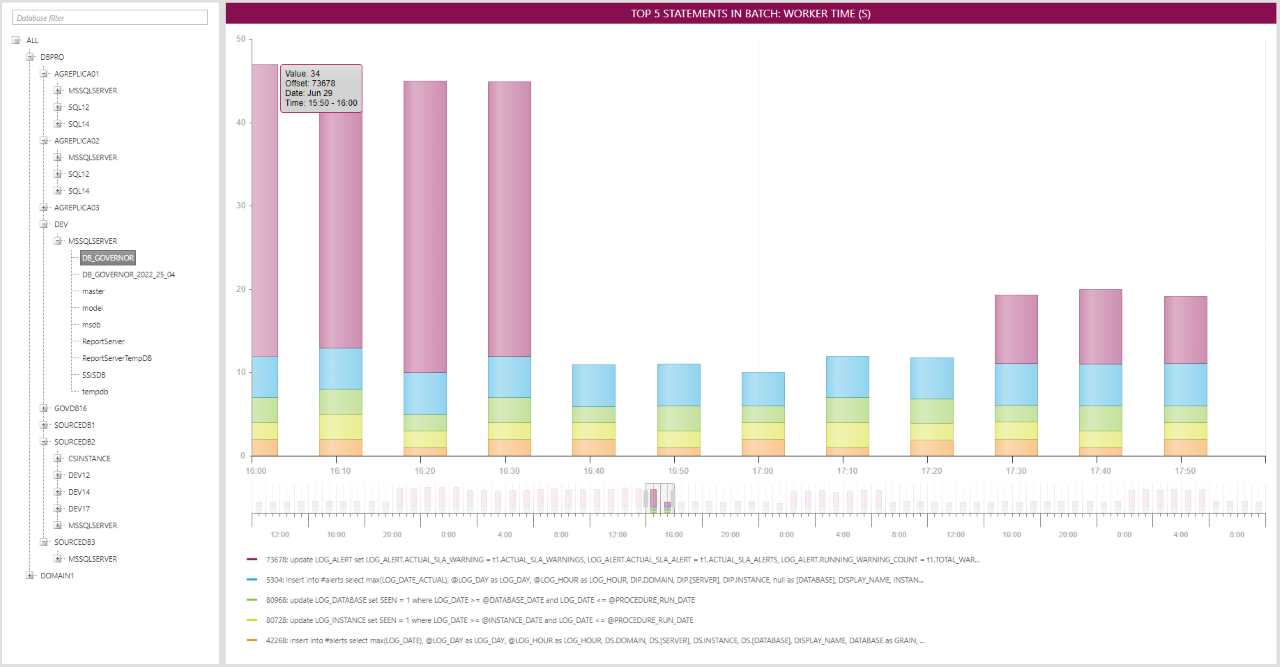 Sometimes T-SQL queries can block each other. If only one query (A) blocks another (B), B will wait until the A is executed. This causes query B to be a blocking victim an therefore being processed slower than normally. By fixing such a blocking statement in a T-SQL query batch, the blocking situation would be most likely prevented. A worst form of a blocking situation is a deadlock, because then to T-SQL statements from different T-SQL queries try to update same record(s) in the database table in SQL Server at same time leading to an cyclic event that can only be eliminated by SQL Server selecting a one of the processes as a deadlock victim and rolling back the T-SQL statements. 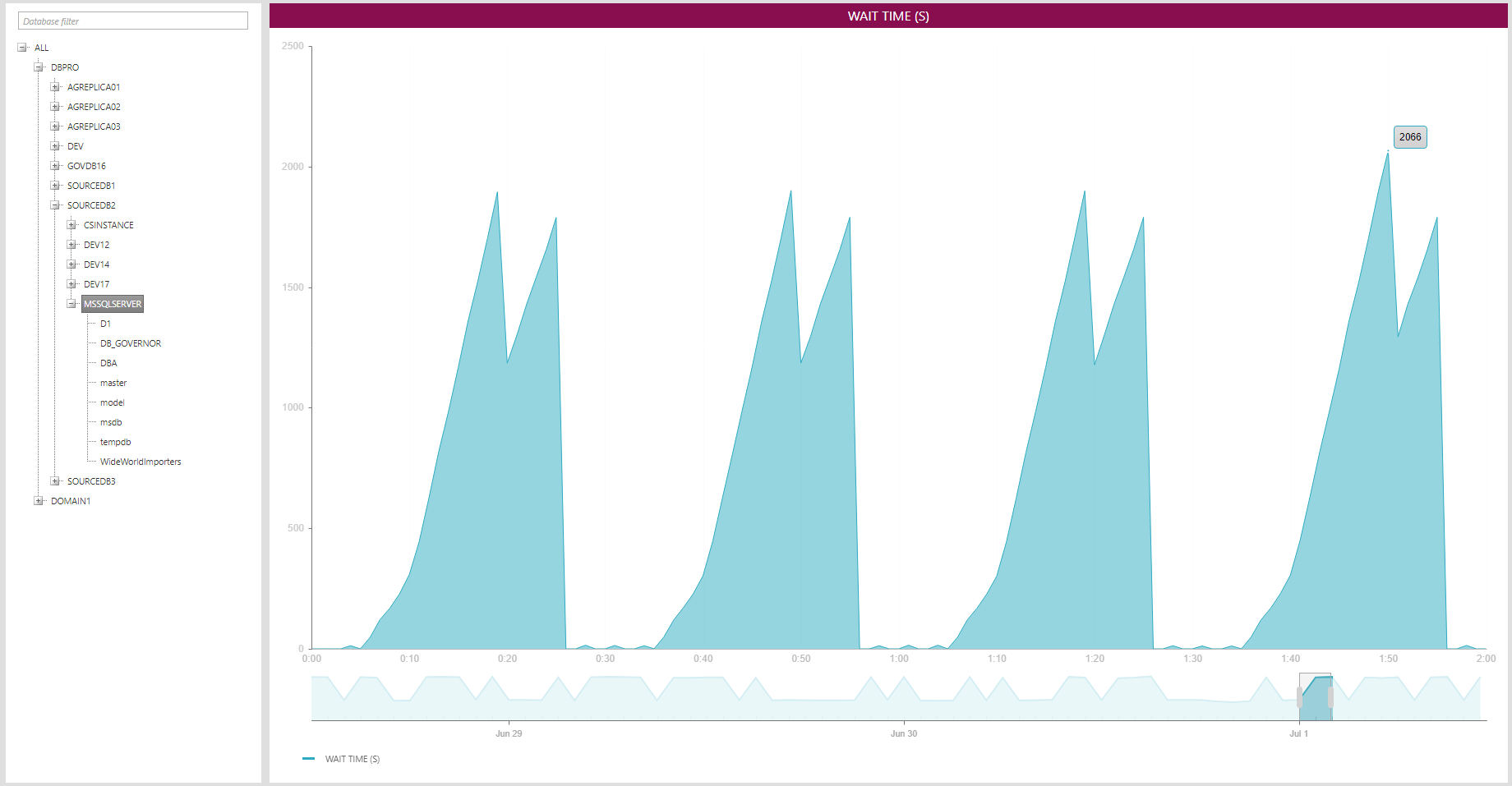 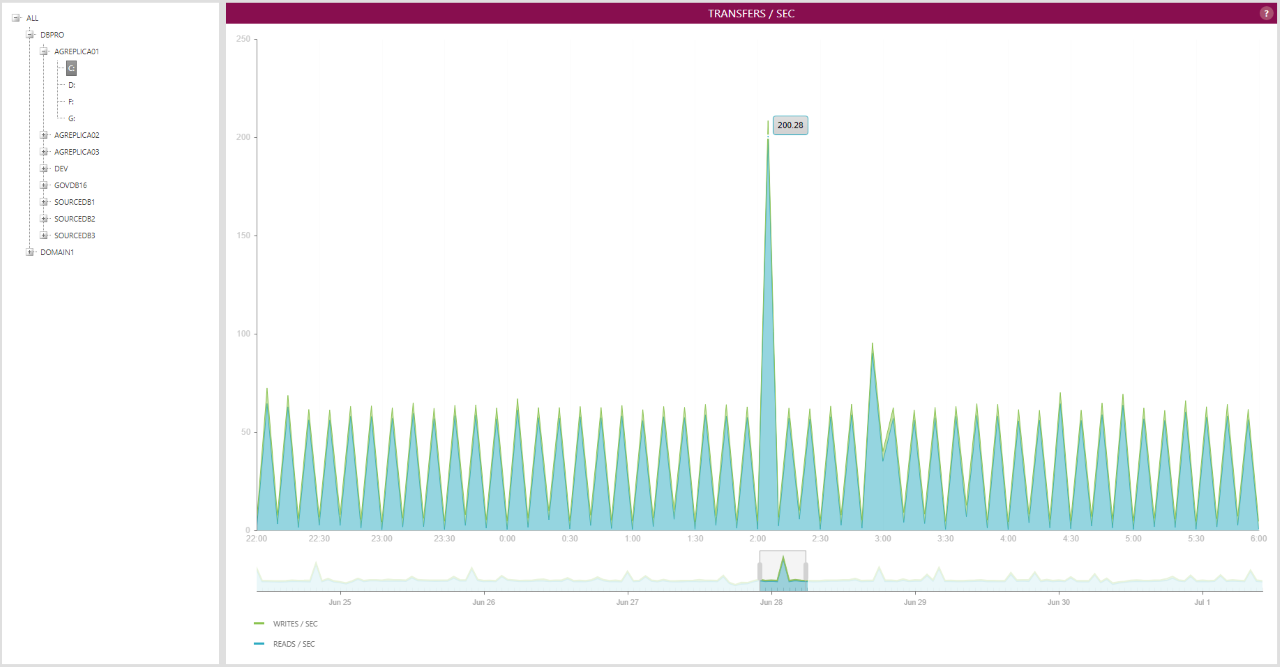 Monitoring physical volumes is important. Just think of a situation where drive space is full or disk IO latencies peak up suddenly. With SQL Governor you are able to forecast when drive space is full and to identify following idsk counter evolvment over time: 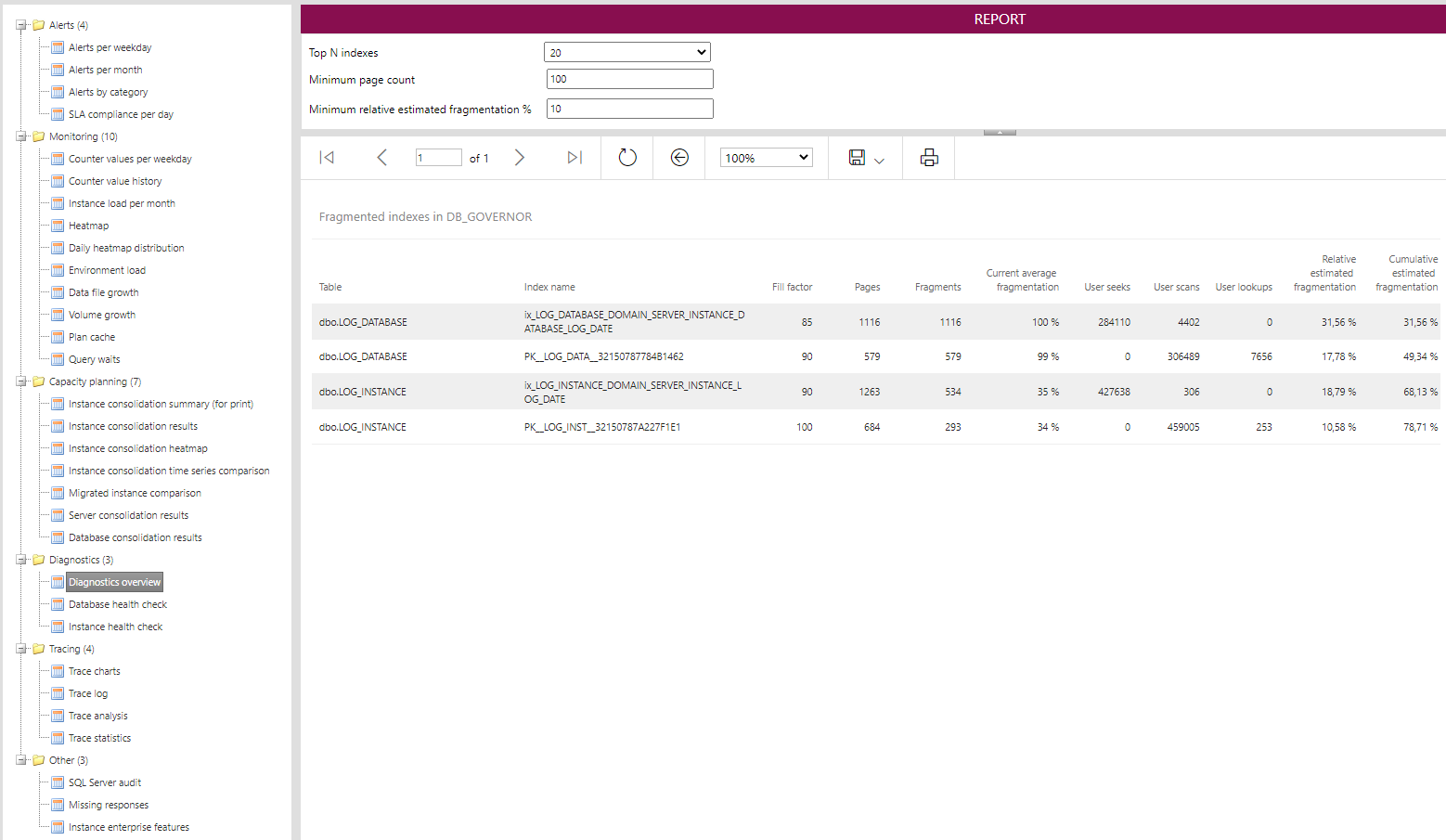 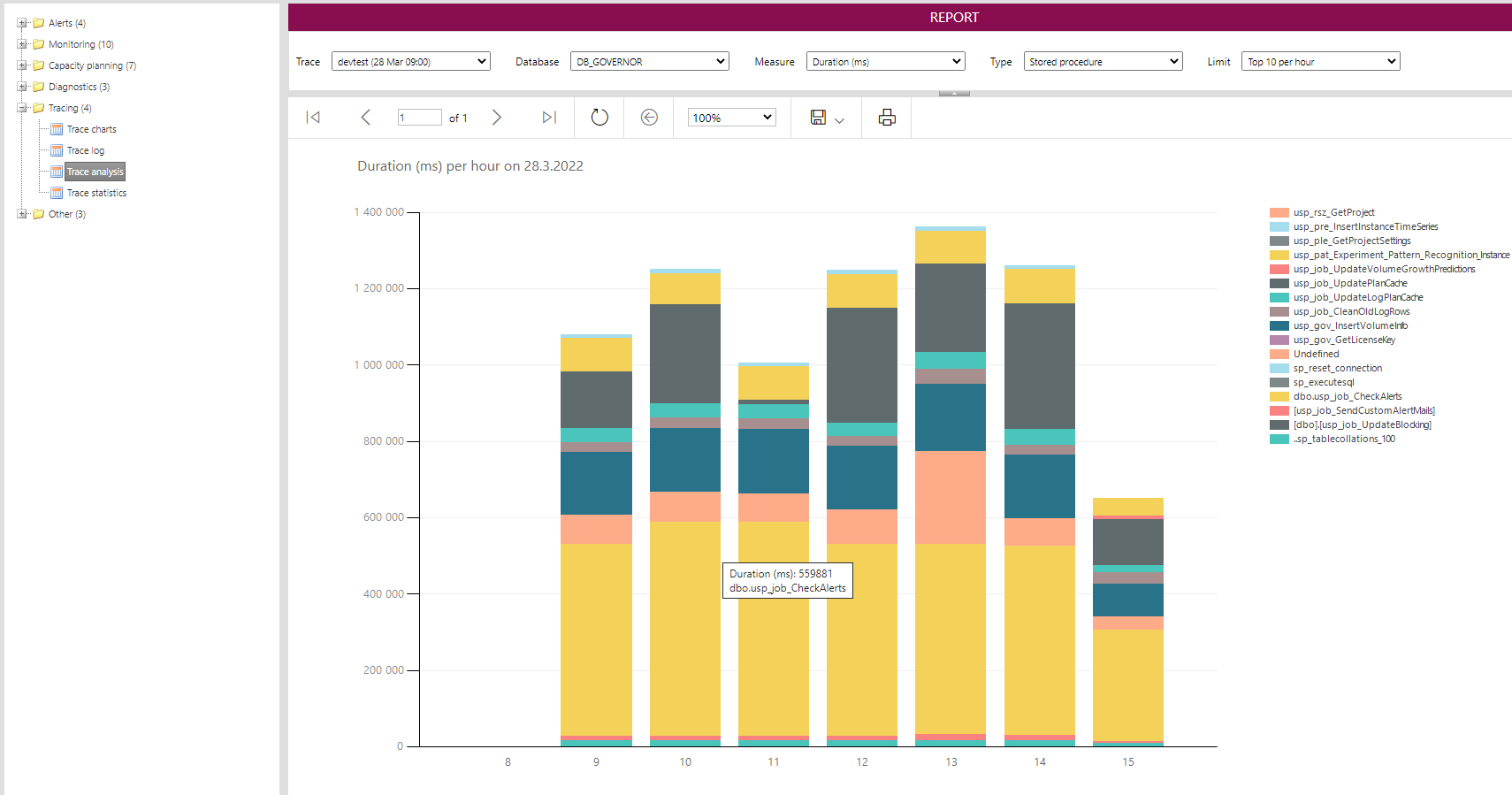 SQL Governor uses classic lightweight T-SQL query tracing. With this feature you are able to schedule one-time or recurring query tracing jobs. Trace job results can be seen from different kinds of reports. These reports are: 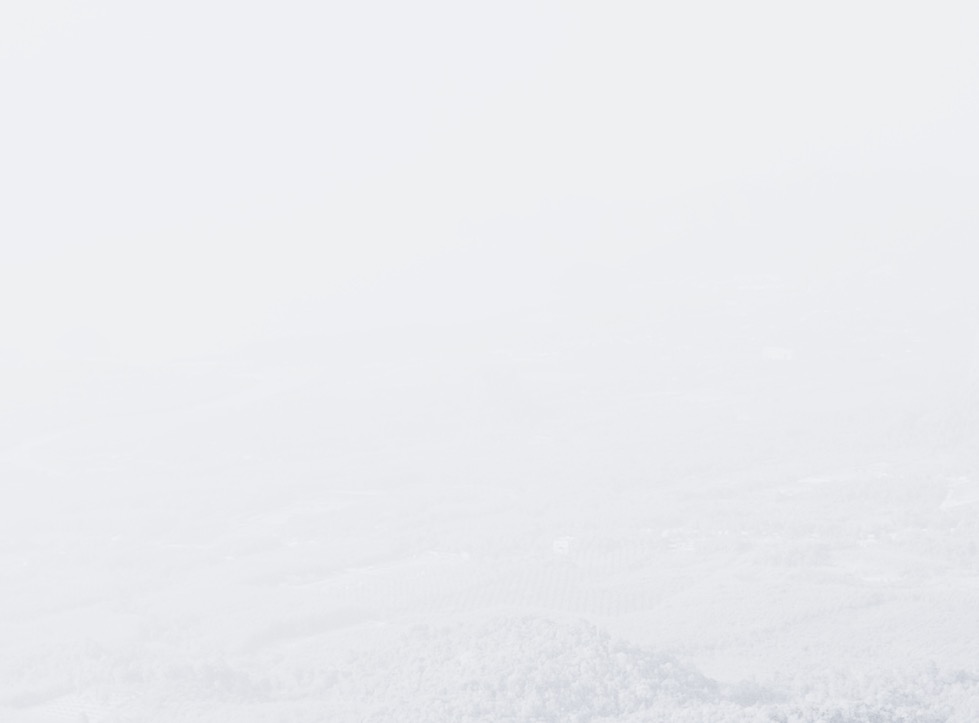 The rate at which data is refreshed in the UI depends on the feature and the collection intervals. Generally, the UI fetches a new set of data from the database every 2 minutes and caches it to reduce network traffic. The performance counter and availability group monitoring pages refresh automatically every 30 seconds; other pages refresh their data (from cache or database) when you click on something.

The data collection intervals are:

Put simply, the limit value defines how many consecutive alerts are required to raise an actual alert. For example, if the limit is 3, the first one or two alerts won't cause any action; i.e. they won't be shown as alerts in the monitoring page and no emails will be sent. Only if there is a third consecutive value that is also above the threshold (or below in case of reversed performance counters) will an alert be raised. Thus, the first alerts before the limit are not really alerts but simply values that exceed the threshold. If the recorded values stay above (or below) the threshold after the limit is reached, then the alert will remain active.

That is, with a limit of three, the four consecutive threshold crossings cause two alerts in total.

Instance waits are collected from sys.dm_os_wait_stats and include all waits generated on the instance, whether they have a SQL query batch associated with them or not. Query waits on the other hand are collected from sys.dm_exec_requests and always have a SQL query associated with them. For example, a backup might cause instance waits but not have any SQL query and thus not show up in query waits.

Why is the continuous maintenance and optimization of the database important?

SQL Governor is a leading-edge software for the planning, forecasting and optimization of Microsoft SQL Server platforms. Please submit this form to request a free online demo of SQL Governor with one of our experts. The efficient run-through will give you more thorough understanding on how the solution works and can help you, and we will answer any questions you may have.